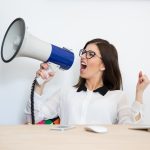 At least four times a week for the past several months I’ve had phone calls from Robogal.

“Hello, it’s Linda,” she begins, in her unvarying, always perfectly inflected voice. Not tremulous or saccharine; not overbold or tentative; not gruff or timid; not hesitant or strident; not cheerless or giddy; not glum or lighthearted; not solemn or mirthful, but easy, tranquil, matter of fact. Just Linda, calling to help out.

Linda is obviously much too busy to call me personally, so she has thoughtfully recorded her perfectly inflected voice to let me experience the thrill of its perfection every time she calls. END_OF_DOCUMENT_TOKEN_TO_BE_REPLACED

What Makes an Offense Offensive? Part I

Let’s get serious. For four years I’ve been commenting on a range of behaviors, most of them verbal outbursts, that everyone seems to agree were offensive. These have included insults, put-downs, verbal wounds, snubs, slights, and other sorts of humiliations; disdainful, derisive, scornful, and contemptuous slurs; disparaging, discrediting, disrespectful, belittling, and derogatory snubs; jibes, affronts, barbs, contumely, rudeness, and outright insolent indignities.

But why? What makes them offensive? END_OF_DOCUMENT_TOKEN_TO_BE_REPLACED

Several hours ago as I write, the Supreme Court knocked out the Scandalous Clause in the Lanham Act, the federal trademark statute, as predicted here last January, though by a smaller margin than I expected, and with a loophole that could but is unlikely to be exploited, at least not soon. The vote in the case, Iancu v. Brunetti, was 6–3. END_OF_DOCUMENT_TOKEN_TO_BE_REPLACED

It seems I overstepped nineteen months ago in claiming that in a unanimous ruling involving disparaging trademarks, “the Supreme Court, presumably once and for all, has green lighted offensive speech.”

In Matal v. Tam, you may recall, the Court struck down a law that banned registration of trademarks that disparage people, institutions, beliefs, or national symbols. END_OF_DOCUMENT_TOKEN_TO_BE_REPLACED

Offense of the Month

Offenses of the Months: Winter-Spring 2020
By mid-April, according to NASA satellite images, Covid-19 has prompted a 30% drop in air pollution in the northeastern United States. Social distancing seems to be having a similar effect on commentary about offensiveness, even if our propensity to offend hasn’t much changed (and who could measure that)?

In the opening days of this year, the attentive reader could find the usual choice stories about tone-deaf commentators and their equally tone-deaf audiences. In early January, for instance, Babson College fired a staff member and adjunct professor who, in response to a statement by President Trump that the White House had a list of 52 culturally-significant targets to bomb in Iran, posted on his Facebook page that Iran should focus on 52 American targets, like the Kardashian family residence and the Mall of America. The college said the post did not represent its “values and culture.” The staffer protested that his posting was merely a bad attempt at humor and accused Babson of caving in to social media criticism. One wonders what Babson might have done had the errant staffer repeated Trump’s statement as his own. It’s a complicated world; you’ve got to think at least three steps ahead of your potential detractors. END_OF_DOCUMENT_TOKEN_TO_BE_REPLACED

A Potpourri of Idiocies

Turtles, but not all the way down

Wanted: Zombies without a Past