Just returned from a 4,000-mile round trip to the Rockies. It took us by car from the east coast to Cleveland, Ann Arbor, Chicago, Omaha, Lincoln, Cheyenne, Boulder, Denver, and back via Colby (KS), Kansas City, St. Louis, Springfield (IL), Champaign, Louisville, and home (via Charleston and western Maryland) — 14 states in all and in several of them, different routes east and west. A lot of ground to look for signs of that spirit of offense that has been fodder in the reports this past year of the national mood. But we found — nothing. We didn’t even find anything mildly suspect.

Political signs were almost entirely absent. One car somewhere in Nebraska zipped by us with a small “Trump 2016” sign in the rear passenger-side window. Another, rather wistful, placard, stood stolidly in the front yard of a home in Cheyenne, proclaiming “Dole-Kemp 1996.” In brief excursions around four campuses, Northwestern, the University of Iowa, the University of Colorado at Boulder, and the University of Illinois, we saw no indication of political activity, not even for Bernie — but this was the beginning of summer sessions, and perhaps students who carry books around in late June in the heat of the midwest have other things on their minds.

We did spot a lone confederate flag flying from the rear ledge of a jeep as it came careening into a gas station off the main highway, I-79, on which we were traveling through West Virginia. We had left the highway to detour into Clendenin, one of the many West Virginia towns devastated less than two weeks earlier by preternatural flooding throughout the state.

The town center is a couple of miles south of I-79, and the traffic off road was socked in. From the highway the entire state seemed deserted. But on the single lanes leading in and out, police were guiding cars through stretches of blocked roadway to allow cleanup vehicles to remove mounds of mud and debris that lined the road. In the five or six square blocks of what we presumed was the central business district, buildings were battered and shuttered. The water had crested to the second story of most Clendenin homes near the Elk River. The townsfolk created a flood-relief site for distributing food and drink: we saw large stacks of bottled water and a small sign that said the good samaritans were out of used clothing. An adjacent field hosted several Porta-Potties. It was a Saturday and many people were out and about, but they were quiet. Still stunned, we surmised, at the ferocity of the storms that upended their lives. Local papers are reporting that some people who have lived in Clendenin all their lives are contemplating moving. Some are enraged at FEMA because of reimbursement limits set by law. So there is frustration and anger, but it’s all “off road.”

On the major highways (we traveled for long stretches on I-80 west and I-70 east), all was serene. That may be because the posted speed limits were 70 and 75 mph (and in the southeastern corner of Wyoming the sign said 80), allowing us to whiz by the immense flat landscape without seeing detail. People were uniformly polite in the unending succession and uniform setting of the fast-food restaurants and gas stations that lie a mile on either side of the transcontinental highways.

I don’t mean to be too saccharine here. There may have been a questionable tattoo or two on the very large arms of some of the patrons next to whom we stood in a 30-minute line at Joe’s Kansas City Barbecue (and we got there after 8 p.m.), but even the fiercest looking members of the biker-gang set were polite as we waited to advance to the attention of the fellows who bark out orders to the cook assembling the half-slabs and coleslaw.

In short (since this is not a travelogue), there’s an inoffensive America that caters to the long-haul truckers and tourists who come by car. They know that you do business by keeping opinions to yourself and serving customers with a smile and an inside tip on which menu items to avoid. 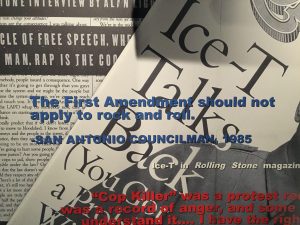 Poster in the Rock and Roll Hall of Fame, Cleveland

If you want to see the entrails of offense, go off the road, and head to museums. There’s plenty at the Rock and Roll Hall of Fame in Cleveland to remind you (if you’re old enough) or teach you about the dubious judgments of critics and the uneven taste of the musical avant garde. Any of several rooms at the Lincoln Museum in Springfield will stun you at long-ago political invective.

Then we came home, and all the headlines have crashed in on us. Of course, the stories they trumpet are not about mere offense, but the stunning mayhem wrought by people with guns and bombs. It almost makes my topic an evening’s entertainment.